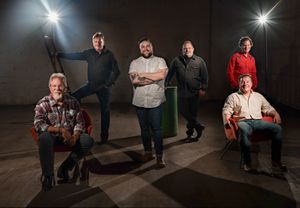 Nashville, TN (August 11, 2020) Gateway Management artist, Jackson Heights has recently claimed their first #1 song on the national radio charts. “Riding the Wind” made history for the group as it climbed rapidly on numerous national charts and took the top spot on the SGN Scoops Christian Country chart.

“We are humbled and blessed to know that radio across the nation has embraced our music. This song has an incredible message and it means a lot to each of us to know that it is impacting people,” stated Kent Humphrey. The hit single comes from their latest album, This Thing Called Life which has shown to be a breakout album for the band. With unmatched musicianship, Jackson Heights has been gaining fans and catching the attention of the Christian Music world.

“Christian Music and especially Southern Gospel music has evolved more in the last few years than ever before. Fans are embracing different styles and appreciate groups who bring more to the stage than simply great vocals. Jackson Heights does that in spades,” stated Matt Felts, Gateway Management.

Jackson Heights is currently on tour for limited dates across the country. To learn more about Jackson Heights, go to jacksonheightsmusic.com.